Well ive still no idea why its called Borefts, but what ever the reason it is the Festival Highlight of the Year. All the stars align for this festival. Its an easy location to get to. Short flight to Amsterdam, simple train ride, and then your there.

This is the 3rd year and it just keeps growing. I wish i had a few pictures but i was far to busy drinkin.
The list of Brewers this year, was once again stellar. These are some if not quite all of the best Brewers in Europe covering the full range of styles.

The food is fantastic, with the BBQ a great addition over last years choices. The range of beers was amazing, with great traditional UK cask to the bigger new brasher range of beers from the UK, The big big beers we have all come to expect from the likes of the Best of Mainland European brewers, and some really interesting sour edged beers from a new comer to the festival, Loverbeer.

I managed to try beers from all the brewers and i dont think i has a single bad beer. Each Brewer brought something interesting to the festival, though obviously we all have our Favourites.

The addition of the 2nd site (the new brewery location) was fantastic, there was ALMOST enough seating(and even better most of this is covered), but there was more seating than any other festival i have been at, and i dont think i actually had to stand for any length of time, which is good as im far to old to stand :-)

At 2 tokens a samples thats about 6Tokens for 300ml. That would be an equivelent 330ml bottle price of 9E which is while certainly justifiable for some beer, seems just a little steep as the average price.

But saying that De Struise had no problem selling there beers, and i certainly was in there for quite a few of their beers, and as this was the only brewer doing this i didnt feel i was spending too much. But i have memories of another festival that i attended a few years back than almost every brewer was charging 2 or 3 or more for the majority if not all of there beers, and i left that festival felling just a little bit ripped off.


There no doubt in my mind (little though it may be) that this is the  best festival in Europe.  SO cheers to all the volunteers as well as Meno for organising this. Long may it continue. 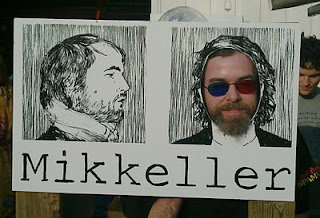