Its Beer Jim but not as we know it.

Now anyone that knows me, knows i like variety. Be it the 40 odd teas i have at home, or the fact that my favourite food is Tapas, or the best known: my Addiction to Ratebeer.

Long before i discovered ratebeer, i was always a half pint man. Any visit to the pub would start with those beers i hadnt had and move onto the rest of the taps until i had had a half of each and then id start all over again.  Ratebeer just fed me the information that there were far more beers and styles out there than i had previously known.

I still love trying new beers, i still rarely drink more than a pint of any one beer in any given week. So the fact that i found myself with 36 pints of one beer this week may come as a surprise to some. I know it did to me. 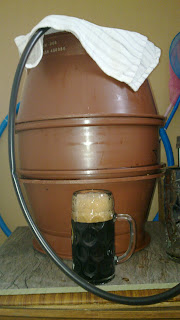 So why do i have this beer. Well its all down to my desire to try new beers, along with my love of the unusual and a love of Puns. When the Brewer first tweeted about this beer, my spider sense immediately  perked up. Did you just say "Curry Beer". Ive had Chilli beers, and spiced beers but never a curry beer. Then the name "Ness Un Korma" this is definitely in my top 5 beer names. I love puns and that one was just perfect. Now many of you will now know the Brewer. Loch Ness Brewery, all they beers are the likes of "Dark Ness", "Hoppy Ness", "Ness Minster" so this new name just fitted perfectly, and i still say he should make a Pea beer.

Desperate to try it, i kept asking when it was coming to Edinburgh, but they dont deliver to Edinburgh often and he said he would let me know. But i never quite appeared, as it turned out that the Beer pretty much taints the lines. Making them a real bugger to clean. However the brewer knew how keen i was to try it. So offered a pin to me. Keen to try it (even at 36 pints) i offered to pay for it. But he would not accept any payment, and whats more he offered to drop it off at the house and  not only did he drop it directly at the house, but also dropped of a bottle of beer that i hadnt tried. Man free beer, with extra free beer. It doesnt get better than this.

So what was the beer like. Well it was a curry beer so the first and most important thing is it was like no other beer ive ever had. Having now taken notes on over eight thousand beers, its a delight to find a beer like no other. This doesnt happen often so each one needs to be savoured. Ive tried over 400 Imperial stouts, and while some are better made than others, some are sweeter, some are richer and some are barrel aged, all told they are still imperial stouts and have much more in common than there are difference. The Ness Un Korma was a world appart from anything else ive ever tried.

I loved it. Not dont get me wrong, its by no way the best beer ive ever had, its not even close. But along with the Asparagus beer from Herslev, the Turkey dinner of a beer from Tinpot or the Cucumber beer from Thornbridge it stands out from the crown as totally drinkable and unique(There is no point in a unique beer if its undrinkable). This is why i want to try every beer i can, you just never know when your going to find something like this. I think it could do with some more body, maybe a little more sweetness, But i hope he does this again and bottles this as i think it a beer worth trying.

So for the last few days and for the rest of the week in the words of the Fast Show "I will be mostly drinking Ness Un Korma" and you know what im loving it. 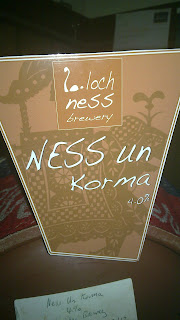 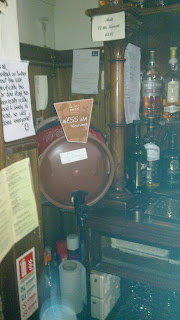 This time its been souped up a little, so its a little less curry like but a lot more spice. One might say Ness Un Madras. All told this is a beer worth going out of your way for, and im glad that i managed to sneak in a trip to the Bow Bar for a quick have of this cask.
Posted by cgarvie at 12:02 No comments: