Well Ive got the Avery Brown Dredge in front of me, and i though that it would be wrong not to blog about the "Bloggers" beer.

Now im not a fan of Lager in any shape or form, so this one doesnt hold out much hope for me, but there only one way to really know and thats to crack it open. 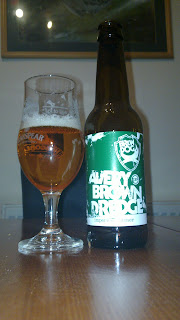 So looks. Its golden amber with a huge white bubble head...  though the head is fairly short lived ... dropping down to a thin white lacing.

The body is light oil ...  light soft carbonation... little chewy ... i quite like the body

All told this is not my favourite beer by a long way ... but the oily bitterness ... along with the fairly heavy hoppyness and the fact that its not to grassy mean that all told im happy drinking it. Though i wont be rushing out to try another.
Posted by cgarvie at 11:47 No comments:

Every tasting from now on, i hope to focus on one beer and get every ones opinion of it ...

Round Edinburgh without a fridge.

Someone on twitter asked recently for good bars in Edinburgh. So rather than trying to squeeze my answer into 140 Characters, i thought it was about time i blogged again.

So lets Start CASK. As ive said im a huge cask beer fan and pretty much all the good bars in Edinburgh as Cask bars.

I love them all because they share the same philosophy, Which is a nice solid core range of cask beers with an every changing guest list all of which is well cared for and well thought out. If my memory serves me right the Tap has 7 taps, the Bow 8(tall fonts) and Cloisters 9. Core wise they all carry at least 1 Stewart beer a great little Edinburgh based brewer, and Cloisters recently replaced the Landord with a Highland  Scapa Special as a permanent beer. Again a great brewer its just a shame it wasnt their 9% Orkney Porter as a permanent beer. Cloisters also has a house special in Stewarts Holy Grail as well as Trade winds and Stewart IPA on at all times.  Where as the Tap has Trade Winds & Stewarts IPA & 80/- as permanent beers

Both the Bow and Cloisters recently  replaced Guinness, with kegged  Black Isle Porter, and the Tap has permanently Black Isle Golden Eye on keg  both of which seems to have been a great success and its great to see support of a Scottish brewery over a multinational.

Though the Tap is a little more out of the way, being in Stockbridge its still only about 20 minutes walk from Cloisters, so its quite possible to do a nice little walking tour of Edinburgh pick up beer in all three bars

Other bars of note:

The Guildford Arms (1 WEST REGISTER STREET,  EH2 2AA, 0131 556 4312)  at the East end of Princess Street, has really improved in my opinion on what it was 3-4 years ago, It carryies 10 tap 6 of which are usually Scottish and 4 that can be from anywhere. The Guildford is at its best though when it has one of its regular beer festival where they tend to look far and wide for interesting beers. They also seem to use a different supplier from the Cloister/Bow/Tap  and as such often have beers from breweries that are not seen else where.

Malt & Hops (45 Shore, Leith,  EH6 6QU, Tel 0131 555 0083) While a little bit out of the way in Leith, does some great beers with a well thought out selection or mostly changing tap of which i think there are 8. A pub that i wish wasnt so far from my house (opposite side of town, as id like to drink there more often)


From here on in Most of the other bars of note tend to carry a much more limited range, so for a beer hunter like myself they lack variety but there are many other bars who Serve good ale.

Kays bar (39 Jamaica Street, EH3 6HF, 0131 225 1858) ( a great little stop on the way to the Stockbridge tap) is a small cosy little boozer with 4 well looked after beers, again mostly Scottish, As a place to sit and drink its one of my favour places.

Halfway House (24 Fleshmarket Close,  EH1 1BX. 0131 225 7101 ) is a tiny little pub hidden up a narrow alleyway behind Waverley railway station, It carries 4 taps usually from Scotland or the North of England. But its again a great little pub to sit and have a pint.


It Surprises some but im actually quite fond of the Spoons pubs in Edinburgh. On the Whole their beer is better kept than one might normally expect, and they do occasionally manage to offer some interesting beer and there festivals are very well thought out.


Finally no beer trip to Edinburgh would be complete with out a trip to the Newly opened Brewdog bar. The delight here is finding beers from the likes of Nogne and Mikkeller on tap, if you have never had beers from these wonderful brewers then this is the place to correct that omission either from tap or bottle
Posted by cgarvie at 09:45 No comments: