Its been a long time coming and ive been waiting till i got a third vintage, and with picking up Batch 4 earlier this month i seemed time to get stuck in. 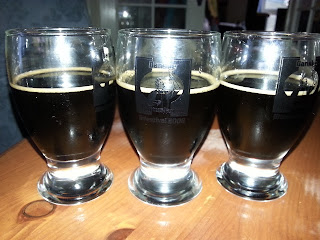 All look deep darkest black looking almost identical with the middle vintage (batch 2 or 3) having a little more head.

The aroma varies quite a lot with Batch 1 being dark treacle and plums, with a little germoline in there, Batch 4 is a sweet honey woody with light licorice and treacle nose ... and the middle batch is very big honey.. soft chocolate treacle .. much drier and much more intense than the other 2.

Mouthfell wise the first and fourth are a little thiner and a little fizzier than the middle one, with batch one being the fizziest of them all. The Middle batch is rich oily body, softer carbonation and much fuller mouth feel.

Flavour wise theres no mistaking that these are the same beer, but their are none the less noticible differences. Batch 1 seems to have faded and thined out flavour wise, its clearly the less intense of the three.
Its a soft roast with the lighest chocolate hints, sweet honey malts with a bitter woody  nutty tones ... the flavours and deep and rich, very mellow and rounded. The differences Batch 1 is more bitter up front, and bacth 4 is very berry fruits and it clearly the more fruity of the three. The middle has the bitter honey tones i associate with many meads.


So which is my favourite, thats like choosing your favourite Child but here goes, It think its batch 4, but its followed so close by batch 1 its a difficult call. But the fruityness wins out, the middle ones honey bitterness in the linger just drags it down a  bit for me and makes it a little to OTT.


and Because its what he would have wanted 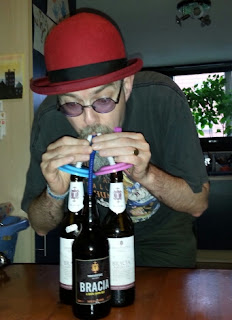 Oddly having it through straws adds a little spicyness to the rich deem nutty malts.
Posted by cgarvie at 10:45 No comments: