A King Amongst Pubs

In the first of a short series of reports from my Recent London trip, is the reason for the visit.

Every year in a tucked away pub on the outskirts of the London Tube lines a festival takes place. Now many pubs have festivals but few that i have attended have 15+ taps(update: there are 24 taps in total with i think 18 in use this festival) on at once and fewer still have all they're beers (over 60 in total) from only from 1 brewery and they're own brewery at that, because this pub is the King William the 4th, and the brewery is Brodies. 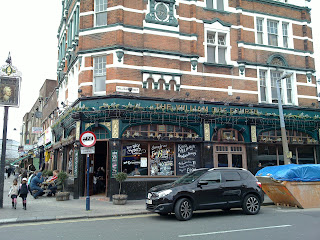 Now i first came across Brodies at the Herriot Watt Beer festival in 2010, when they went south to brew there. But though that beer was fine, it was the Mint Choc Chip stout that caught my eye, and tickled my tastebuds. It was then that my love of a far away brewery started. Having had such a fine beer, i wanted to know more and there is no finer resource than Ratebeer. It quickly became clear that this was a brewery after my own heart, they were a) prolific, b) experimental.

I followed the London crowd, trying more and more beer thats i would have loved to try, but failed miserably to try any(other than the Superior London porter that again was brilliant, and the 22% Elizabethan that i had someone sneak me out a handbottling but they just acted to taunt me in how many great was missing), that was until Ratebeer European Summer Gathering 2011. There were 2 must visit locations for me on that trip(that i had to fit in round my family) one was the newly opened Kernel, the other was the King William.

Then disaster struck. The King William had cellar problems on one of the hottest weekends of the year, there were clearly a few beers that were struggling. The bar staff were quick to replace any that were clearly bad, but there were a few that while not bad, were clearly not living up to their potential. However in amongst them were some great beer and i didn't regret the visit in the slightest, The potential of the Bar and the Brewery were clear and thus it leads onto my trip down there.

Having seen they're previous festival list ( a month or so prior to the Ratebeer gather) i was keen to make this years festival, but having children there are only so many events you can attend. Brodies just wasn't looking likely, that was until a cruel and evil Danish man, decided to hold his festival on the same weekend as my Sons birthday, and suddenly i had a free beer event in my calendar.

So trip down to London, Many thanks to Chris and Ruth for putting the whole family up in there home, A quick trip to Egham festival (report to follow) and off to Day 1(Friday) and Day 2(Sunday) of the Reason we crossed the border. 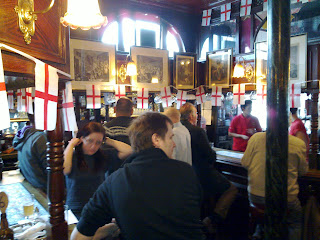 At first it looked like there were few beers on, but there were still a few ones to excite my tastebuds, and then it became clear that more beers were on but the bloke with the pumpclips had phoned in sick, It might have been better if fake paper clips were made, but we all quicky learned to lean over the bar and read the sticker on the bar side of the tap.

It wasnt long till we noticed that the Elizabethan was on, It was time to try it fresh. It was every thing i remembered. Sweet Sticky Rich Juicy and full of flavour, rich malt and vanilla. Just wonderful though you dont want much,  Now at £2 a third, for a 22% beer this is surely a  bargain. But you'd be wrong. Because all the other beers were £2 a pint. Including the Star of the show for me, Brodies Romanov Empress Stout Rioja BA , as you would expect all the best beers for me where dark, from the Rioja, to its Whisky Brother (maybe one day i will try the base of both of these), to the incredibly intense coffee and hop Columbus for Breakfast through to a collaboration with that evil Danish man Mofo Stout. Also impressing me Stout wise was the Sting in the Tail (with the clue in the name) that clearly had something special going on that i couldnt place, until i was told it had Chillis in it, then it became clear that while not Hot, there was definitely some chilli spice in there.

While not everything impressed me (or at least didnt appeal to my palate) there were 8 beers that scored 4.0/5/0 or higher on my ratebeer scoring, and just to show they were not all dark beers, the Gruit was fruity and full of flavour, that i just couldn't stop guzzling it.

All told, we had a great time, got well watered and well fed at only £6 for a massive main meal, i could not have been happier with my choice of festival.