I hadn't planned on writing any more on this but late last night I discovered One Brewery has decided to respond to InBevs taking a minority share in Ratebeer with what I consider Industrial Sabotage. 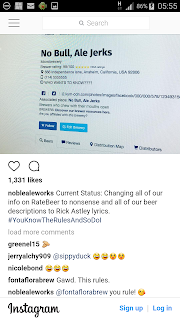 Leaving Ratebeer looking like this at the time I found it. (It has since been fixed) 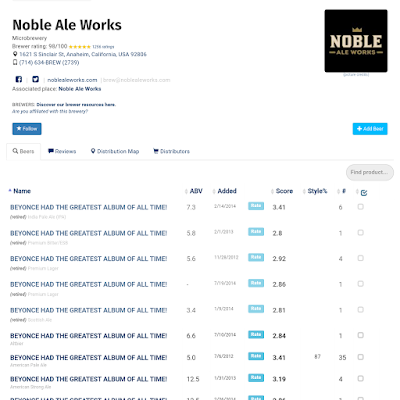 Childish, maybe even funny if you do something like that to one of your mates, But remember this is one business doing it to another business. So as I see it, deliberately setting out to damage someone elses business, with clear intent that's Industrial Sabotage at worst and certainly a clear case of vandalism at best,
and it would seem that in response to concerns over InBev Manipulating Ratebeer data,  Noble Ale Works has decided to do exactly that and go a step further and actually alter the Data.

How they did this is clear, Brewers have always been allowed access to their own beer names, so that they can if they desire ensure the information is correct, and they decided to abuse this permission in an attempt to damage Ratebeer. I've heard one person comment that they gave them permission so there's nothing to answer. But I dispute that, It's the equivalent of a Brewery employee deliberately setting out to label all the beer with the same label, and I dont imagine that employee getting a pat on the back.

Quite frankly I'm furious about this, and if I owned Ratebeer i would be taking legal advice over this act. But it's not only the act itself that left me raging, but the praise the brewery is receiving for an act that if not criminal is clearly immoral.  It would appear that where InBev is concerned no one else can do no wrong, and as I said in my original post when you act like this you are no better than InBev and in this case arguably worse.
Posted by cgarvie at 23:25