Let there be Light

Just to prove that im not Just all about beer, here a little on my Solar Panels Adventure

Ive looked into getting some form or renewable Energy a few times, but the costs involved and the payback time never seemed to make sense.


Well that all changed with the Introduction of the "Feed in Tarrif" scheme. So when i found out about that Last May. I decided the time was right to invest in Green Energy and Solar Panels

I will go into the economics of the Solar panels in a later blog but here im going to cover the 'Story' of their installation.

Having decided to GO for it. I had to pick a company. So i went hunting 3 quotes.
I choose Eco Sun Power (http://www.ecosunpower.co.uk) both for being the best quote but also because i found them the most responsive to my queries.  Something that was to come in handy time and time again.

Next I discovered that I needed a building warrent (this seems very much of a grey area with some regions requiring one, and others not. But unfortunately it is a requirement in Edinburgh) This required first getting an Architect to work with Eco Sun power to plan the Layout of the solar panels on the roof so we could supply drawing for the Warrent, and secondly a structural engineer to prove that the roof could carry the extra load of the panels.

This for me was the most frustrating part, as i assumed it would be easy, but a combination of people on Holiday and very few previous installations to go on, lead to a lot of time being lost as we negotiated the requirements of the Warrent.

Having Finally gained our building warrent, we planned a date in December, only for the worst snow fall in 20+ years.  So delayed again we re-planned and in Late January 2011 over 9 months for the start of the project.

First up before eco sun power arrived was the Scaffolder, He arrived the day before eco sun power were due, and erected the scaffolding while i was at work. This was smooth apart from blocking the signal to the satellite dish of my neighbours, who were left a little frustrated.

Day1: Fitting of the Rails. The Panels are mounted on a rails system. With careful measurements taken to ensure rails firmly attached the the roof joins. Rails fitted  and ensured water tight.

Day2:Panels fitted to the Rail system and some electrics carried out. This was my biggest fear. How they were to run the cable from the Panels on the room to the fuse box on the ground floor. But Eco sun power planed a route down through several built in wardrobes. Drilling down through our 1foot thick concrete floors. That left no visible signs of there work. 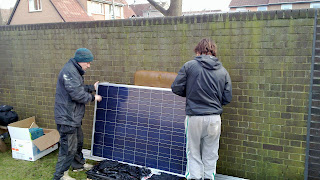 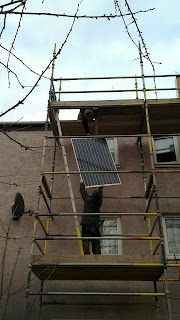 Day3: Connecting up and commisioning. I was out this day leaving my mum in charge, but just after lunch i received an email from the MCS commissioning scheme (MCS is needed to claim the feed in tarrif)
and with that the work was complete. 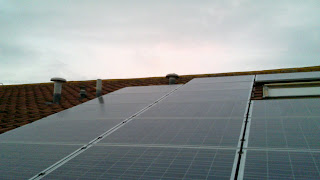 All in all the installation was very smooth, its just frustrating how difficult it was to get the Building Warrant.

Now i just need to sit back and watch as the electricity flows in
Posted by cgarvie at 11:04