Last monday, Tim Anderson, you know, the bloke who Won Master Chef came to Edinburgh to cook me dinner, for his convenience he decided to to it at the Caley Sample Rooms in Edinburgh, rather than my house which would have been more convenient for me. Saying that he decided to arrange me a menu paired with Beers from the Black Isle Brewery.

The Menu was
a 1/2 Pint of Yellowhammer Pale Ale on Arrival followed by
Gazpacho Cullen Skink w Gyoza aith a Dumpling side dish paired with  Black Isle Blonde and then
Korean-Style Venison Tartare with Gochujang, Nashi and Sesame Toast with Goldeneye Pale Ale

So lets dissect the Evening :-)

We (me and Stella) arrived and were directed to our table, where we met up with one of our friends Sevare who we had arrange to sit beside and another couple, which by chance happened to include one of Scotland's newest Ratebeer members Ben, who id met just recently when he came to one of my tastings.
Very quickly our half pints of Yellow Hammer arrived, and we settled in for the evening, The first course took longer than expected to arrived and i ordered a bottle Weihenstephaner Vitus  only a few minutes before the first course and the next drink arrived. Well that was bad planning on my part :-). 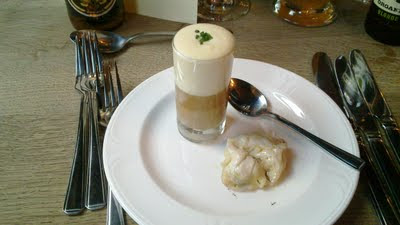 So the first course was the Cullen Skink with a side Dumpling. Now i dont like fish, so i wasnt really looking forward to this, but all told the Cullen Skink was palatable,  and all told wasnt actually bad and i loved the way it was served in the shot glass. The Dumpling on the other-hand was amazing. I kind of wish id taken the time to analyse it in the same way i do a beer, as i cant tell you what it tasted of, ive not a clue, all i remember was popping it in my mouth thinking wow this is GREAT, and then it was gone. I know it was a taster menu but boy would i have liked another, 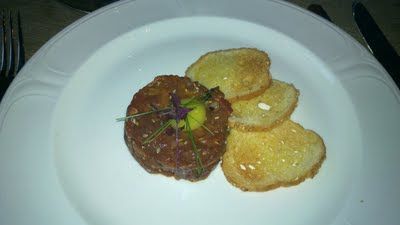 The Second course was raw meat. Now this is an odd one, as the first time i ever had Raw meat or  Tartare as its politely known was in a Korean restaurant in Manchester. I had no idea it was raw meat, Stella and my mate Ben did and giggled amongst themselves, knowing i had no idea what id just ordered. But i had the last laugh as i really quite enjoyed it. Ive only ever had Tartare one other time since and that was in Hungry where i didnt enjoy it nearly as much, so i was really looking forward to this course. Luckily i wasnt disappointed. I dont think it was quite as good as my memory of the first time but given that that was 8-9 years ago who is really to say. All i can say was this was damn tasty, i enjoyed the light Chilli bite to it, but at the same time i dont think i could have eaten much more of it. Much as i really enjoyed it, there just something a little odd about eating raw meat 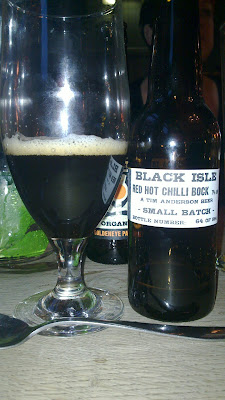 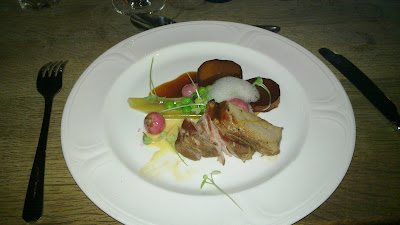 The Main course was being served with the beer Tim helped brew at Black Isle, and being the beer fan i am, this was the most exciting beer of the evening. A smoked Weisen Bock with Chilli. Now im not a big fan of smoked beers, im not a huge fan of Bock beers but i am a BIG fan of chilli's so this was going to an interesting beer. You can read about what i and others though about the beer here.
As for the Main course food,well WOW again. The meat was wonderfully tender, the sause rich and complex. and made with Cola? Ive no idea what he did to the Butternut Squash a vegetable that im very fond of but it was a different take on it and very tasty as well. Of all the courses this was probably my favourite, it all seemed so well balanced. BUT..... i will come back to this 'but' in the summary. 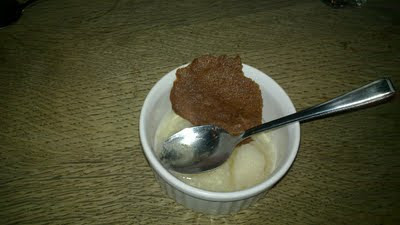 Pudding one was a Sorbet made with the Black Isle heather honey all, not at a Brewdog binner i has beer infused jelly that while interesting was just a bit weird. This was also weird but also very tasty and refreshing, i enjoyed this little bit of strangeness and the snap were well tasty. 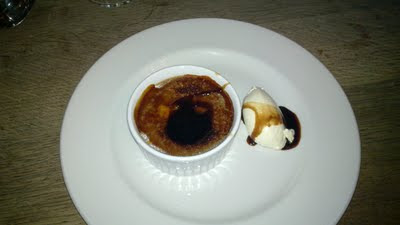 Pudding two was the Sticky Toffee Crème Brulee. Now this is a real interesting one. As mines was runny, Stella's was firm and mousse like, and one of the others was even runnier than mine. Now i think it was meant to be like Stella, ie firmer. But i much more enjoyed it like mine was than the bit of Stella's i tried. So there was clearly inconstancies. But you know what that was ok by me. I recently read how very few Master Chefs have successfully opened a restaurant, and i guess this is one of the main reasons why. Being able to cook a GREAT meal for 4 people is NOT the same as being able to cook the same great for for 50 people. Especially when all 50 people sit down and expect there food at the same time.  I think Tim did a great job, i think on the whole everything was handled pretty well. Ok the Puddings varied a bit but they were all tasty. By doing these Dinners around the country, Tim is gaining great experience should he want to open his own restaurant, and in the process he is giving people all over the country a chance to try his cooking (at what was a pretty decent price) The fact that this was a beer dinner and he paired the food and the beers, was just icing on the Cake. But it was important to me, i wouldn't have been interested in a Masterchef dinner if he hadnt the same love of beer that i have. It was that that had my interest (in fact i never even watched Masterchef it was only after he won, and i discovered he Managed the Euston Tap in London that i took notice) 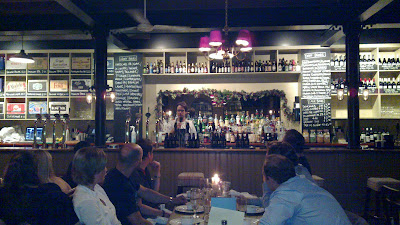 Which brings me to the summary and that 'BUT' i mentioned earlier.
It was a great night, we had some great beers from Black Isle, we had Amazing food from Tim, BUT in the end, all at my table were still hungry (and i heard others comment the same) This was a real shame as i was left thinking i could do with a kebab. Well ok maybe not that hungry, but for me all it would have taken was a basket of Bread on the Table, or a nice side of mashed potatoes with the Cola Braised Pork. Neither of which would have cost much. Neither of which i think would have destroyed the Balance of the meal. For me it was real shame that when i left i was thinking "its a shame we didn't get more to eat", rather than "WOW what a great meal" and the reason that it is such a shame is that "WOW what a great meal" is what it was.
Posted by cgarvie at 09:50