My Life in Beer : The Gospel according to Ratebeer

Due to some cool back stage works by the people at RateBeer i now have access to some cool stats for every Year i have been using RateBeer. So i have trawled this information and compiled it into my Life in Beer.

I started Adding Beers to the Rate beer Database back in 2007 so while the first year probably reflects 3-4 years worth of beers(the notes i took prior to Ratebeer), after that it more or less reflects my life in Beer


How Much I Rate

As can clearly be seen the longer ive been on rate beer the more beers i seem to manage to try every year. I suspect this is a bit of my continuing Ratebeer addiction and the increasing availability of new beer. 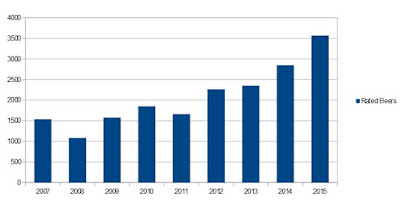 Here we can see the number of different breweries i have tried each year, this i think shows the increase in number of breweries available 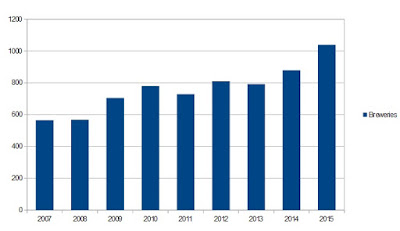 This Graph shows the Number of newly opened breweries that i rated in each year, reflecting once again the growth in new breweries 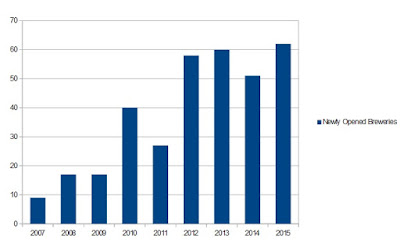 Where What I Rate Comes From

The below Graph shows where i mostly Drink beers from, showing all the countries that show up at least one in my top 5 countries of each year. 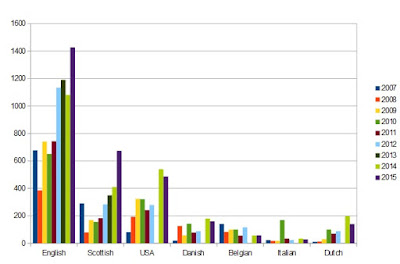 As can be seen the UK is a beer market as a whole despite Ratebeer separating out each of the UK regions. and the sheer number of English breweries ensures that they always eclipse Scottish breweries. Though the Graph does clearly show in Explosion in Scottish beer. With 2015s massive peak down to the creation of the Alpha Project beers from the Hanging Bat and the Expansion of Stewarts into there Craft Beer Kitchen range at the brewery tap. The Italian peak was due to a RateBeer gathering in Rome where i went wild. Though in the middle years 08-11 i did a fair bit of trading for US beers, its clear also from the graph(even after taking CBC into consideration) that the availability of US beer in the last few years has sky rocketed.

We now look at the Styles of beers that i have rated over time, again the styles were chosen on the ground of each style having made it into the top five styles for at least 1 year 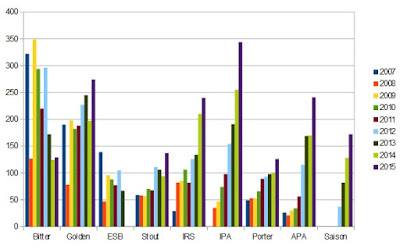 Several things jump out at me, the most obvious being the meteoric rise of IPA,s  and the emergence of Saisons in 2012, alongside the rise of the American Pale Ale. What is less explainable if the persistence of Golden Ales while bitters and ESBs die off.

This Table shows the Best brewery of each where i had tried at least 5 new beers from that brewery that Year.

This is where it gets messy as we often have a top equal each year. So Listed below are the Top UK and International beers for each year based on my Ratebeer Score. With multiples listed if they scored the same


2012 was an odd Year as my top 2 drinks were not Beer.
But and Ice Cider La Face Cachée de la Pomme Neige Récolte D’Hiver and a Mead B.Nektar Cherry Chipotle.

But what is most interesting to me is the Lack of what is arguably my Favourite Beer, the Old Chimney Good King Henry Reserve. Knocked out of the Top spot by My First Experience of the Kulminator in Antwerp and the 1981. Now ive had the kings ale a few times since and never enjjoyed as much(though generally very good) but on that first encounter in that place it was clearly the beer of the Year. So sadly the GKHR loses out.

Whats very interesting is that Before i researched this and for the last few years if pushed to pick my favorite breweries it wouldnt and couldnt be a short list but the first two id mention would always be Hawkshead and Highland (now Swannay) So its interesting to see them both appear Prominently in the lists but in totally different ways. Hawkshead dominating my Best Breweries List and Swanney appearing most in my best beers list. Yet neither appears on the other list.

Its nice to know my gut feeling backed up with hard figures all be it with a twist.