Last Saturday, we abandoned the kids the care of the Aunties and headed down to the big smoke for a Wedding Reception.

We had very kindly been invited to the wedding of a wonderful ratebeer pair MesandSim.

So the Day started with an early start, and a long train ride down to London, but armed with a good book and a plan for when we arrived, we soon arrived. Straight off the train onto the Tube to Euston Station and first stop the Brie Louise. Now i hadnt quite realised how close this was and it barely took us 3 minutes from tube to being served. The Brie Louise is a lovely pub, with 5 Hand pumps and 12 on gravity along with a great selection of ciders. 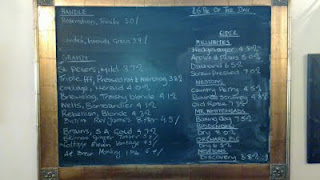 I order 3 thirds one each of Redemption Trinity, Art Brew Monkey IPA and Camden Town Inner City Green all of which i realy enjoyed and served on a nice little tray 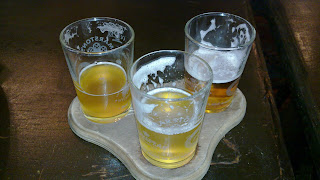 From there we very quickly (less than 15 minutes later) headed off to the Euston Tap, again less than 3 minutes from the Station. In a  lovely old builing (that i foolishly didnt photograph) The inside while quite small looked like it had an upstairs and was dominated with a square bar, with taps along the back wall and fridges to either side. 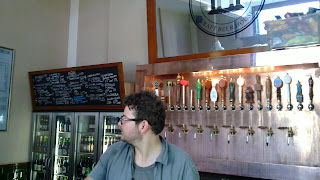 No thirds hear but i managed to order halves of Bristol Beer Factory Sunrise,Redemption Fellowship Porter , and Matuška Černá Raketa (Black Rocket) 17° while none were bad the only one i really enjoyed was the Fellowship Porter.

Again quickly out and onto the Hotel to get changed and ready for the Wedding. 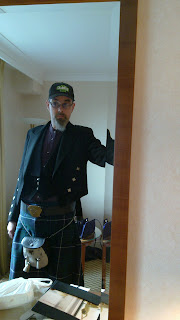 Once we had changed back onto the overground train back to Euston, and then tube heading towards our third pub of the Day, the Southampton Arms.
However on the way we past through the best tube station in the World. I had reached the Holy Grail of Tube travel 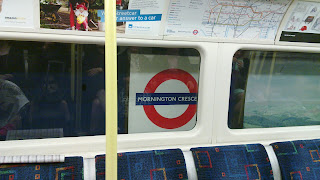 On Reaching the Southampton Arms we discovered a nice range of beers and once again quite a lot of Ciders, not something i have seen in many Scottish pubs. 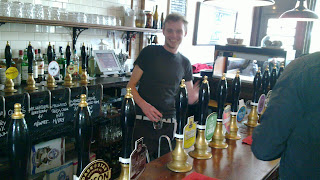 As luck would have it Renound Blogger Knutt Alber was also here so we grabbed our first coupled of beers and sat down to chat to him however my ratebeer wild side had kicked in at this point (with such a range) and me and Stella shared halves of Slaters Monkey Magic , Otley Thai Bo , Festival Pride, Hardknott Atomic Narcissus, Windsor & Eton Conqueror, and Buxton Blonde as well as trying a couple of ciders and some pork pies.

However it was time to head to the Wedding so me, Stella and Knutt headed off to the Venue.
Im not sure quite what the building was but it was a nice little venue with a reception hall, leading in to a nice open spaced hall with a stage at one end and a large dance floor, later on one of the Best Buffets ive ever had was served along one side. There was lots of great food but the highlights for me were the pork belly and the Hop meatballs.

But now we are onto the Wedding Bliss its not many couple that plan to upstage themselves at there own wedding, but this is just what MesandSim had set out to do.
This was to be no Ordinary wedding.During the Early part of the day we were entertained with a singer/guitarist that was really quite good and I would like to know more about, then later on we had a  band  that was a hard rock band and they were Damn good and i would have loved 20years ago, now i just felt Old.

But the Real upstaging was the Bar. They had set out to supply some of the best beers they could lay there hand on. 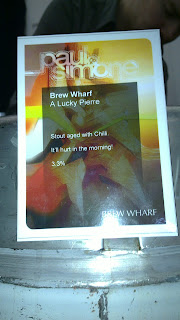 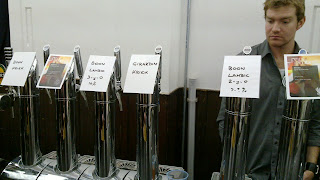 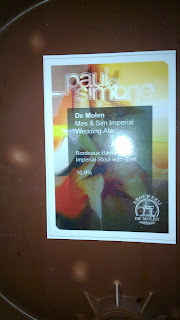 Highlights for me were the Brew Wharf chilli stout at 3.3% Brewed by another rate beer friend this was a pretty rich stout for its ABV with a big Chilli Kick, The De Molen Imperial wedding ale. Although this beer had brett in it (something im not fond of) it was fairly light and this was deep rich and complex. Yeah it would have been better with NO BRETT but its was still damn tasty. Then we get onto De Struise, any wedding that has Struise Aardmonnik / Earthmonk   is clearly taking the Piss but thats what was there, then 2 more beers appeared over the evening Struise Black Damnation VIII - S.H.I.T., and the beer named for the Groom. Struise Black Damnation VI - Messy . Now Messy was certainly right as it was a 39% stout based on Struise Black Damnation III - Black Mes   which is a Caol Ila version of Struise Black Damnation This was an amazing beer rich dark sweet complex and wonderfully balanced. Well apart from one thing i dont like Islay whisky, so while i really really enjoyed this the Islay like the brett in the De Molen beer earlier just wasnt my thing.

Saying that my beer of the Evening wasnt one supplied by the Bride and Grrom but by another very generous Ratebeerian who had brought along a 100year old bottle of beer, to help MesandSim celebrate their wedding day and they were all generous enough to let me try a little. 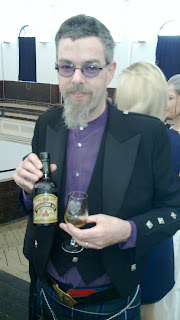 Now its not every day you get to try a 100yr old beer so this already had excitement value, but the smell was just amazing, i could easily just have sat at home smelling this beer for 15 minutes before tasting. Deep dark complex malt roast, some toffee some treacle even a hint of black currant. Just an Aromatic Pleasure, then the taste. WOW this wasnt the best beer of the evening flavour wise not by a long shot, but still this was a pleasure to drink, it was amazing how well this beer had help up for its age. It seemed very alcohol warming without being spirit like, had deep soft mellow meaty malty tone(well you dont expect hop character to survive) definite soy sauce tones but light and adding to the complexity rather than destroying the flavours. If i was to rate this beer for experience, its would be a clear 5/5 it was not only exciting to try but a pleasure to drink, and I salute you for the chance to have tried this.

So Let me raise a Toast to MesandSim,
"May your marriage bring you as much joy as mine has brought me and Stella"
(I will let you guess if thats a Curse or a Blessing)
Posted by cgarvie at 11:36