Tonight ive got a few people round for a tasting.
This is my favourite way of drinking. A few good folks round with a few good beers to hasten the night on its way. I got into beer because ive always enjoyed a real ale or two. But discovering rate beer opened my eyes to a wider variety of beer, but better still it opened my world to a whole selection of beer lovers.

Beer lovers are great, on the whole theyre amazingly generous as any one who seen the number of free beer competitions going on in Rate beer over the last month. But the best thing about a tasting is that  a great beer shared is doubled in value as you get everyone else's enjoyment as well as your own, and if the beer is bad then you all share in the pain and suffering, and finally there's a beer that i just dont like but other do.  In that case the beers not wasted the way it would have been had i to suffer it on my own or dump it down the sink. 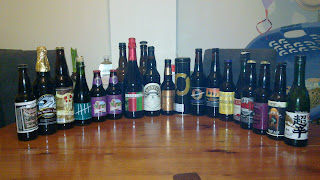 and we will mostly drink from this, but as the night goes on and we chat, a beer may come up or maybe just a style or brewery and then its off i go to dig out something or other. Now theres only about 4 of us this evening so i dont expect to drink more than half of whats out, but what ever remains will just go back into the cupboard for the next tasting.

Tonight its Me, the Wife, Blair, and BeercastRich  and we opened the evening with a Firestone walker Parabola as a few people had been raving about that one recently. Including @BGRTRob who said "arguably the best beer I've ever had!" when he saw it in the Photo.

Well when i said we, i actually meant me, as the others started with a little of the Marble beers i kept that i opened last night. They were both to good, not to allow the others to try. But the first Fresh bottle of the evening was the Parabola and it poured deep black with a lovely tan head ... wonderfull molasis roast (see Ratebeer for my full badly worded ill considered verdict in every beer :-}) 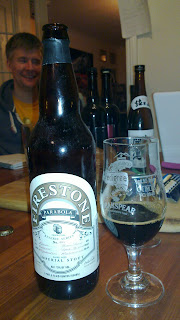 Then onto Beer 2. Pliney the Elder. A total contrast but a wonderfully balanced double IPA. Too well balanced hides its 8% very well 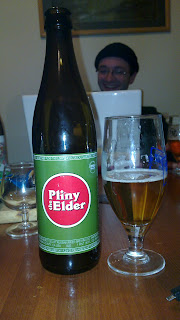 Next up is a coffee IPA from Kernel... When i first heard of Mikkeller doing an Coffee IPA i though WOW i want that and so far have failed, but only a week or so later i heard of the Kernal Coffee IPA. I think there too close to be copying so must just be a freaky coincidence ... and man am i glad that ive got to try this ... It was really quite nice, This was followed by London Brewers Alliance porter which was pretty decent. 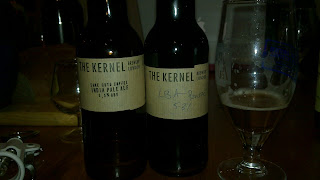 Then we had the first fail of the evening. Kuhnhem Bourbon Barrel Barley wine ... this was full of a odd cheesy bourbon ... very odd and didnt work for me.
So we had to have another bourbon barley wine just to see , Central waters 2008 vintage much more balanced.

this is getting harder to keep up as i get a little more tipsy so im going to sign off after this one.
We moved onto  Rockyard Imperial Red... oddly this US beer isnt on Ratebeer... well it is now but its gonna be rated by three guys in Edinburgh and no Americans ... how very odd.still it was light spicy red ale.

well we went on to have a few more that evening including Weyerbacher fourteen and the Amager Olbutikken % of which there were only 120 bottles, but the star of the evening was the Nogne O Dark horizon 3. 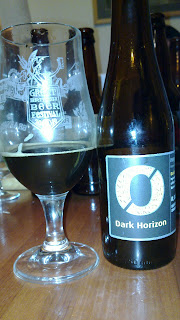