Last night Brewdog Edinburgh held a Hop Evening Featuring 21 IPAs
Unlike the Last event i attended, where we had to wait about 40minutes for the Taps to come on, this one was run like a military Operation. At 7pm pretty much sharp they opened all the taps with Board 1 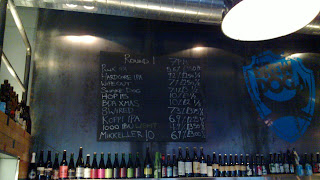 In amongst this lot are two totally amazing beers from Mikkeller, The Mikkeller 10 is just such a rounded IPA, the balance is perfect and its just as close to perfect an IPA i have had, along side this is the Weird side of IPA, with the Koppi (coffee) IPA. This is a nice hoppy IPA with just enough soft coffee so as not to overpower. At the other end (though others enjoyed it) was the frankly undrinkable Mikkeller 1000IBU light and it was just as you would expect bitter as hell. From the non Mikkeller range i tried the Evil Twin Before during and after Christmas, and 8 Wired Hopwired, both were perfectly decent if not really my thing.

Then at 9pm we moved onto Board 2 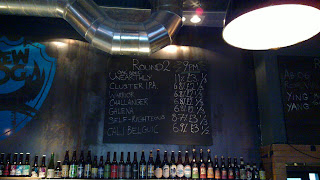 From Board 2 once again got stuck into Mikkeller beers with 4 of the single hop beer. Now the problem with single hop beers is while they might be interesting just using a single hop tends to mean that its not the most balanced of IPA. These 4 all fell into that category, in that all were all ok, but not great with the best of them for me being the Galena. As an aside i've only had 2 single hop beers (both Citra) that i thought was very good, one from Kernel, the other from Tempest.

And then finally at 10pm my moved to Board 3 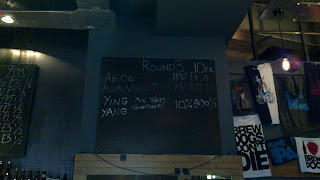 I didnt stay for board 3 but i have both the Ying and Yang coming in bottle form, so i will try them at a latter date.
Posted by cgarvie at 11:02