This will be an odd blog entry as i will update this most day, rather than post a new blog each day.


Day1 only 4 of the Festival beers on at lunch time, but the Landlord was down to £1.50 in order to clear the line ASAP :-) None the less of the 4 beers they has 2 of my Favourite.

The utterly amazing Highland Orkney Porter, and Cairngorm Black Gold. Also on was York Citra, and William Brothers Fourth of July. I tried the Fourth of July which was a decent bitter , little sweet but well balanced, the Citra which while quite nice wasnt a patch on Tempest or Kernel Citra, and of course i could not leave without a half of the Highland Orkney Porter. This beer as ive probably said before is on my quite short list of beer that i try every time i see them, and this time it was just stunning.

In many ways this is the best ive every had it, the depth and complexity of the roast was amazing, body was full and rich. However this was a 2009 cask and there was definitely a touch of oxidation to distract. Now dont get me wrong. The time that added the oxidation also allowed the beer to mature into the wonderful beast that it is. This beer is a treat every time i see it, and this time was above average despite the oxidation.

I also manage to persuade a random Canadian into trying the Orkney Porter and it got a big thumbs up from him to. So head down there and try some soon. It wont last long

More Musing tommorow (with a bit of luck) 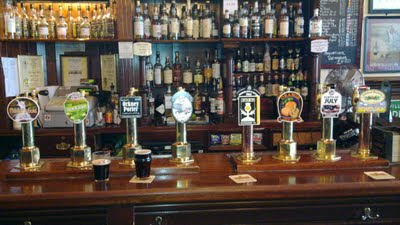 Well as can be seen from the Taps above, we have already had 2 casualty with the Black Gold  and the York Citra disappearing since yesterday. But new on since yesterday we find a full tap festival line up, with Fyne ales Fiddlers Gold, Okells Santium, Pot Belly Black sun, Black Isle Yellow Hammer, Green Jack Orange Wheat, and Oakleaf Some are Drinking.

Today I had another Half of the Orkney Porter and who can Blame me. No extra notes needed other than to say its not often i have the same beer 2 days in a row. But the opportunity to drink this in cask should not be passed up, I also had a half of the frankly disappointing  Black Sun, first off i assumed this was going to be a stout or porter (like theres any difference) but it clearly wasnt. I suspect this is blend of there Beijing Black and their bitter. All told it wasnt Bad, but it really wasnt up to much and i wont be going back to that one.

Much to my pleasant surprise i was able to talk another random punter into going for the Orkney Porter, but i struck out on my 3rd attempt when the woman said it was too sweet for her. Well not every one can have the class and sophistication that i do :-)

With Luck next report on Monday 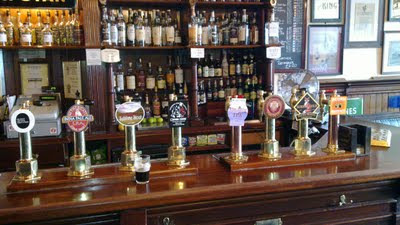 Well as can be seen and as can be expected over the weekend all the Beers have changed. So who know what i may have missed :-) Today i sampled the average Concrete Cow vanilla stout and the wonderful or is that Sublime, Sublime Stout from Fyne Ales. More again tomorrow. 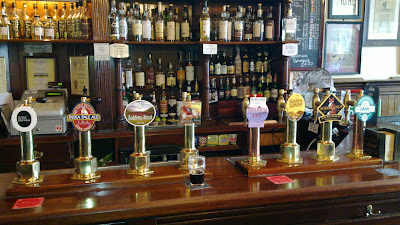 Today i had a decent if very average beer in the form of Wold Top Golden Summer, a golden blond ale, with light hop flavour profile with long bitter linger, and the really quite tasty Corvedale St. Georges stout. This is a very standard dry roast stout. Nice dark red black , thin tan head, good solid roast malt base, some coffee charcoal roast. Could have done with a little more body to it, but not thin. All told very tasty. 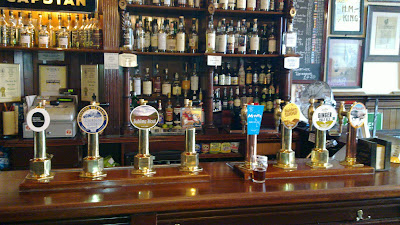 As can be seen 4 of the Taps have changed since yesterday as predicted, and im expecting 4 more to have changed by tomorrow. Todays tasty delights were Potbelly Streaky and Burnside M-Pire. Both were decent but neither were exciting. The streaky was a pale golden light lemon hopped ale, where as the M-Pire was more a toffee malty ale. Rumour has it that there a few Stouts due to come on, so lets hope i see a new stout tommorow.

Day 8 and my last report. I will be in again tomorrow but no time to write it up. 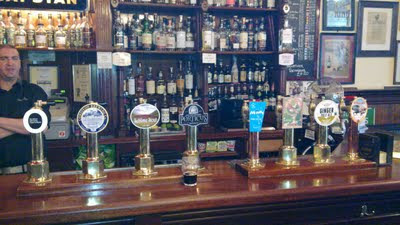 As can be seen another few beers have hit the dust, but the Otley is still holding on there. Sadly the barman attributes this to it being 5% and thats just a little bit on the strong side so has been selling slower. It seems strange to me, but ive seen it at many beer festivals where quite a few people do consider 5% to be just a little strong. Ah well each to there own. Today i tryed the Finch from Natural selection, 4 students at Herriot Watt university. Nice to see they didnt go for a blond beers, but something like an old ale, soft toffee malt, deep fruits, was just a little sweet though and Naylors Porticus Stout, again being a stout it was more likly to impress and again i was pleased not to be disappointed, a good solid chocolate roast. Very nice all told.


In summary, i wasnt blown away by too many this time, and for me the festival not having as many "big" beers it didnt quite live up to the Winter festival. But still a great mix and i had a great time nipping in everyday. Star of the show should be no surprise to anyone. It was Clearly the Delicious  Highland Orkney Porter, a beer i never tire singing the praises of.
Oddly nearly all the other stouts and porters ,seemed to be a deep red brown colour than a deep thick black, no idea why this migth be, but it was just a silly observation i had over the week.

Roll on the Winter Festival.

In breaking news though i discovered that the Wonderful Manager of the BowBar, Helen is moving on, It will be sad to see her go, and im sure more than me will miss her, but I know shes trained the staff well and that we will be in safe hands.

So here to you Helen, and all the Best, You know your always welcome to my tastings.
Posted by cgarvie at 11:24